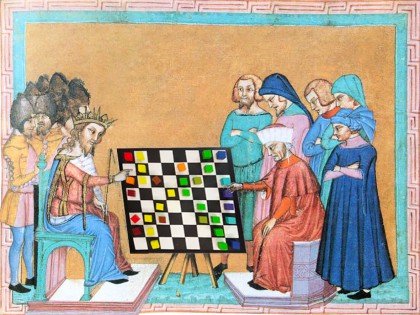 Color Chess XL could be seen as an imaginary dialogue between Malevitch and Johannes Itten. This dialogue translates into a game of chess in which the figures have been replaced by colours.

Color Chess XL is successively and simultaneously a sculpture, a painting and a giant chess game. The installation develops in three stages: 1/ the opening – 2/ the show´s duration – 3/ the Finissage.
1- “Abstract geometric”– 64 black and white cubes, representing the chess board, as well as 32 colored cubes (the figures) are piled on top of each other to form a sculpture placed in the center of the gallery.
2- The game: the day after the opening, the cubes are rearranged to form a chess board, covering the ground surface of the entire gallery. On every following day a chess move is played by one of the participating players, who communicates it via internet. The chess moves are then completed live in the gallery on the giant board. This means the window display changes, day by day, throughout the exhibition’s entire duration.

3- The final: The show lasted 25 days, thus allowing 12 chess moves for both sides: to be played, leaving the game unconcluded. The two participating players finished the match in person during the finissage. Checkmate in favor of Pinsel – Der Kalt Kontrast  wins the game.

Special thanks to the players: Jan Kritenbrink (Jan) und Dag Przybilla (Pinsel), and to J.P Sexauer